Coming from all over France, we met in the Vosges at the Ecole Nationale Supérieure des Technologies et Industries du Bois. It is around our passions for woodworking and outdoor sports that we got to know each other. Our taste for adventure and the desire to create an activity in accordance with our principles, led us together towards entrepreneurship.

The adventure begins during our studies in the garages and attics of our roommates. Robin starts strong by making hollow wood surfboards with a friend. Quickly, Quentin, Antoine and Aurèle accompany him in the realization of two pairs Later on, the making of bamboo bikes and wooden goggles pushes us to ask ourselves the question: Why not live from our passion? 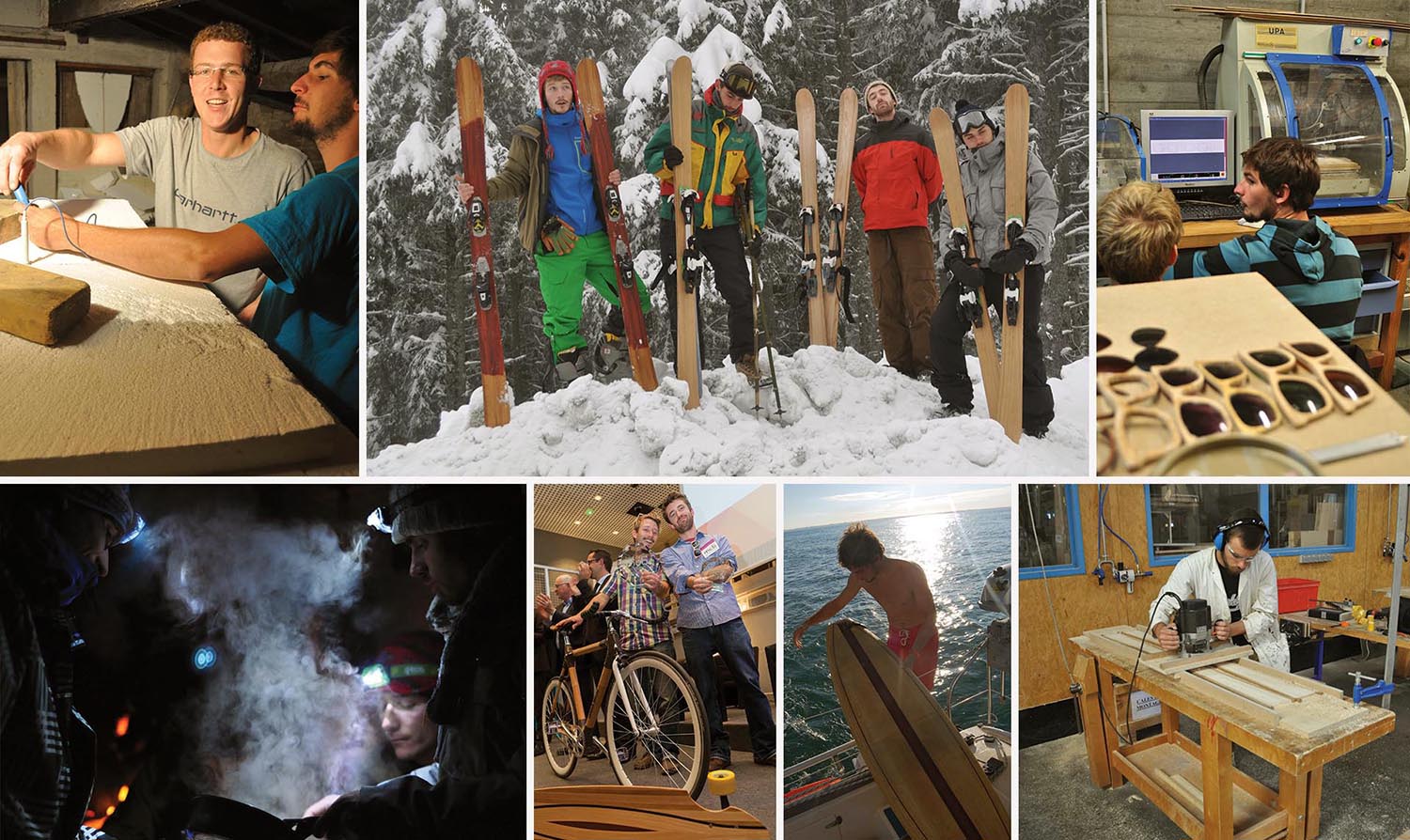 Very quickly, our project is echoed by the Pôle d'Excellence Rural Terre de Hêtre. Wishing to promote entrepreneurship in rural areas, the PER proposed us to enter the Pacelor business incubator. We benefit from an access to the ENSTIB machine park as well as a building in the community of communes of Bains les Bains. Such an offer is not to be refused!

In order to buy the first machines and to start the manufacturing, we launched a campaign of participative financing. With more than six times the initial objective, that is to say nearly 60000€ collected, we knew that our products were liked and that this project would go further. 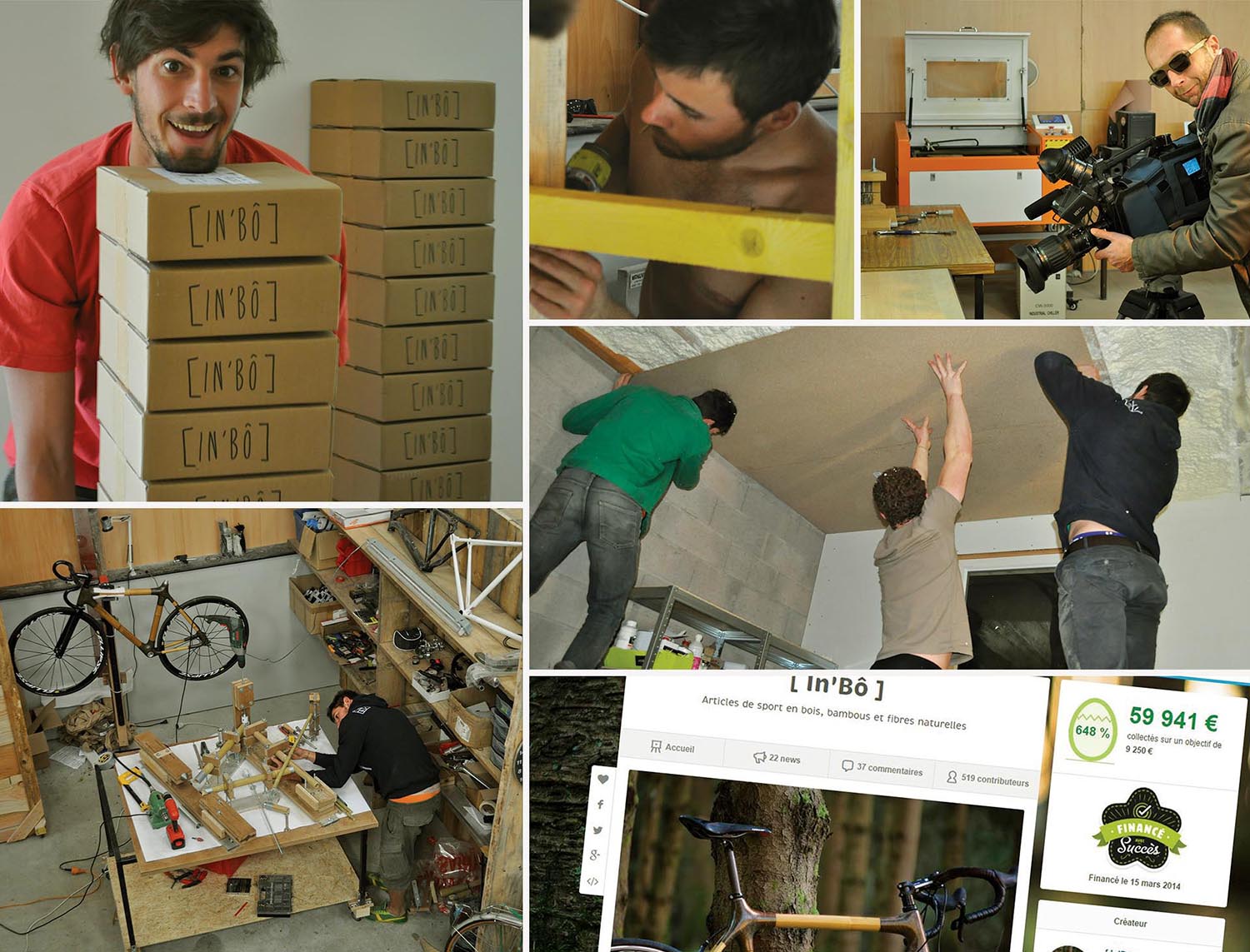 Our project continues its way. About fifty opticians and skateshops trust us all over France. The press follows us and allows us to relay our adventure. The fresco of 9 boards, created in collaboration with Pierre Gréau, is regularly exposed during events. We meet the Solidream team: a beautiful partnership is born! Three Fat Bikes set off on the roads of Pamir in Tajikistan. We are still accompanied by the business incubator, but not for long. 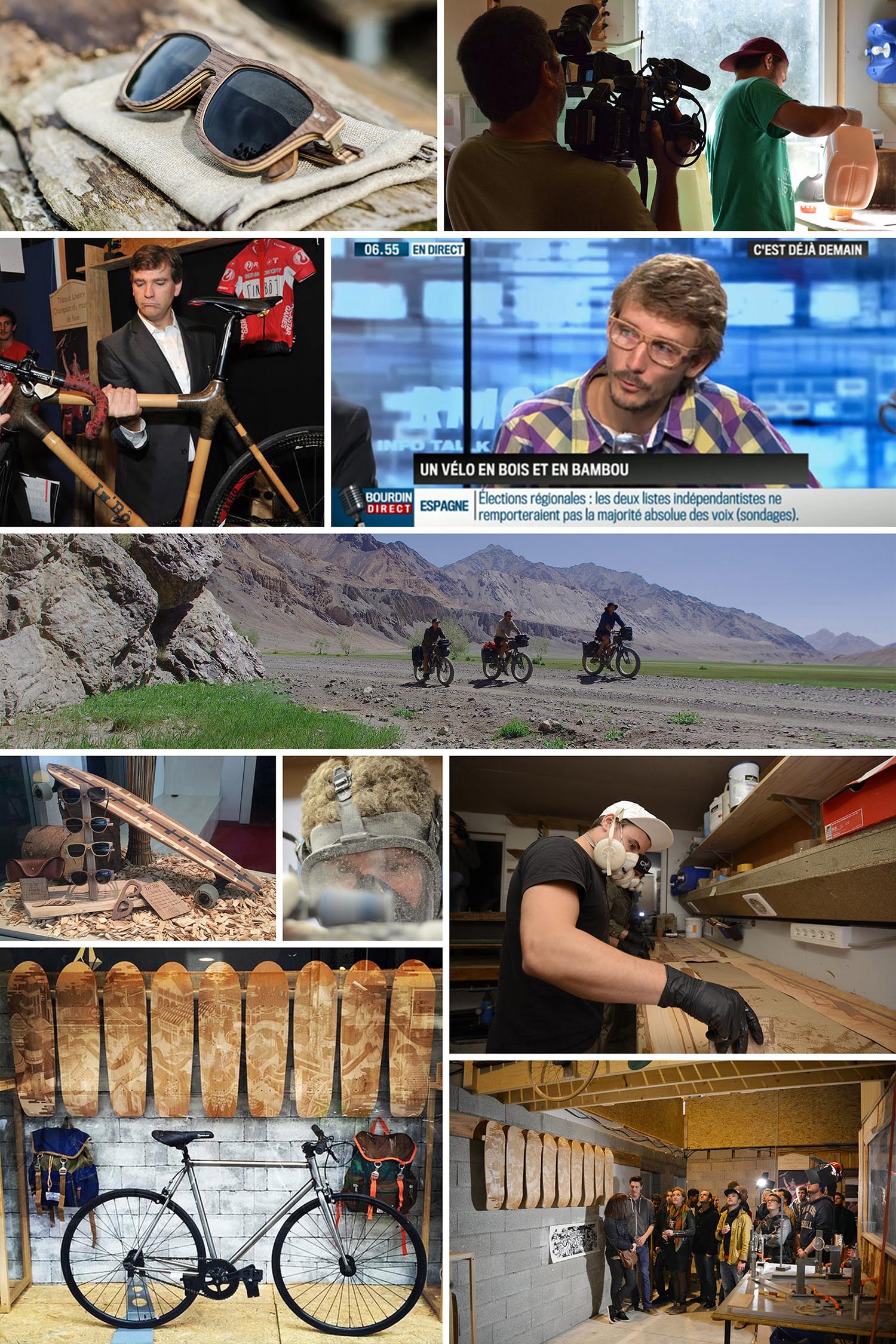 It's been 3 years since our project started! Our company is growing and changing. In July, we left the incubator and filed our own company statutes. It's good, we are all alone now, or almost. Indeed, the team has grown. Four people joined us to help us in the workshop: Jérémy, Romain, Christophe and Félix.

On their side, Pierro and Robin left for new horizons, the first one in reconversion, the second one to explore the world. Good luck friends! We are now seven people at In'Bô. Many trainees have also given their time to make this project evolve.

The team is changing and so is our workshop! We have grown rooms and floors to be able to evolve serenely. By the way... RIP our mini-ramp....

One year after their return from the mountains of Tajikistan, the Solidream team released the film: "The works of Pamir" (to discover in our products). Meanwhile, the surfing team of Lost In The Swell borrowed Solidream's fat bikes to ride along the Gabonese coast in search of the wildest waves.

Two beautiful collaborations were also born, the first with Christin Georgel on a series of 30 screen printed boards and a second with the brand DC shoes on a special series of boards in marquetry. 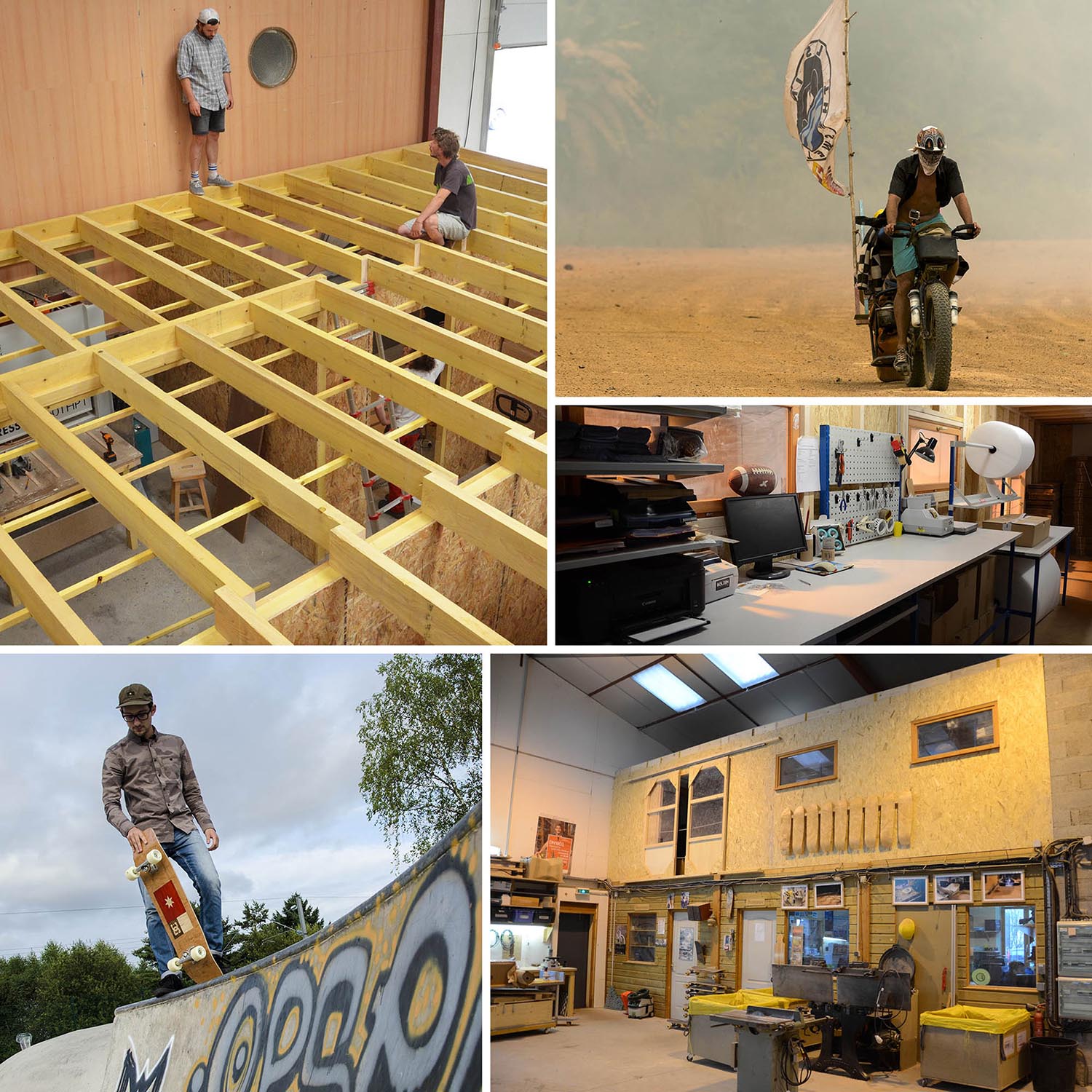 The year is off to a strong start. After several trade shows and the creation of a new range dedicated to opticians, we are expanding the team a little more. Arnaud and Baptiste come to help us in the workshop while May and Kevin join the offices.

After a very good Optics Show in September, we start a national tour to present the new collection. Today, more than 350 opticians trust us and play the game of the Vosges manufacture.

As we need to take a break from time to time, we start building a skateboard ramp next to the workshop. It is in Belgium, in the company Stabilame, that we cut the frame. It will be assembled at the Epinal tattoo show before finishing in the garden.

2017, it is also beautiful meetings, as during the visit of Mr Hollande to ENSTIB, who will be amazed by the bamboo bike. 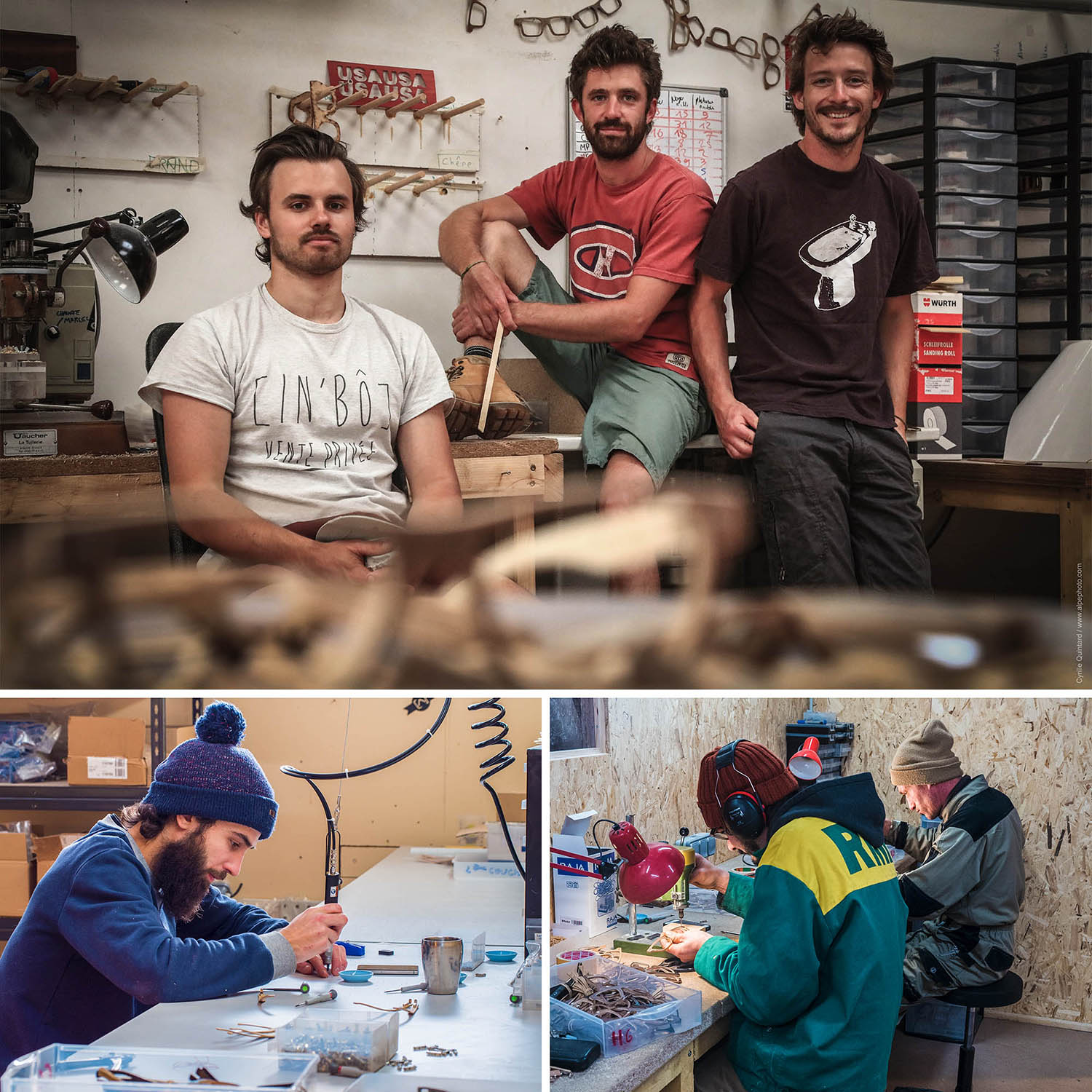 Our story continues with one more year: 14 people work at In'Bô and 6000 glasses are made. We have recruited new faces: Marie in sales, Zainab in graphic design, Jonathan, Sylvain and Anthony in the workshop.

We now work with more than 550 opticians in France, but also in Belgium, Luxembourg and Switzerland. We are starting to feel cramped!

We were able to welcome a few more journalists to the workshop, including France 3 National. We also exchanged with Mr Macron during his visit to the village of Les Voivres. A presidential visit in a hamlet of 250 inhabitants, it is not seen every day!

The partnership with the Epinal Tattoo Fair continues, BMX boxes came out of our workshop in June. 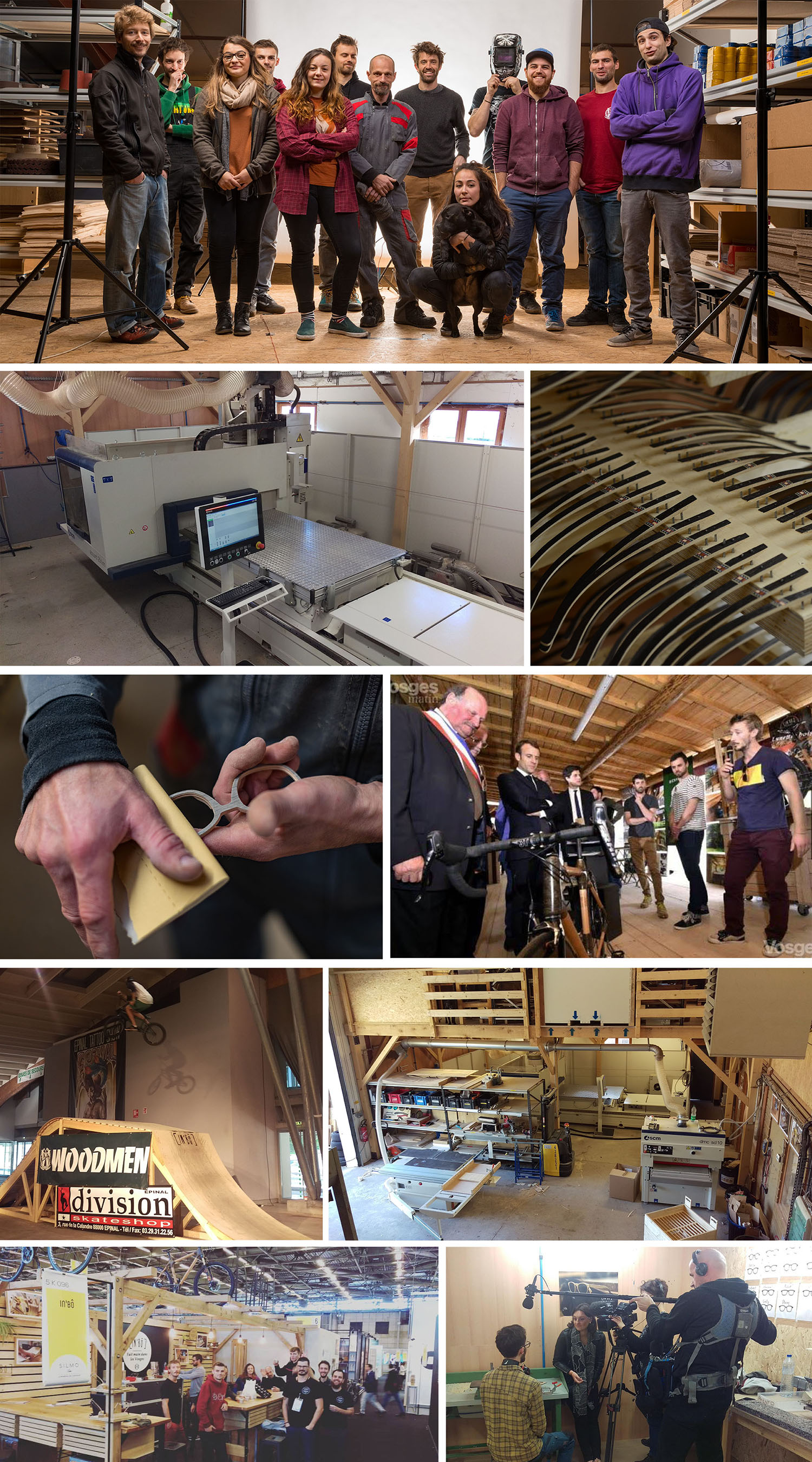 This year, Robin (one of the 5 founders of In'Bô, remember) is back. After having stretched his legs on his bike around the world, it is with pleasure that he finds the Vosges workshop filled with new toys: a heating press, the 5-axis numerical control which makes mass chips, a 3D printer... What better way to get involved in R&D?

New faces have also appeared on the commercial side with Sébastien who is in charge of the western sector and Anaïs, in the workshop, who is at your disposal for all your requests. In'Bô is now 17 people!

Pics manages the production like a boss after Antoine, who left to search for the Mayas in South America during one year. The ranges of glasses are expanding: it's a whole range of colors!

We made a small tour on France 5 in "Silence ça pousse" in the heart of a documentary on woodworking. Finally, the project of enlarging the workshop was born... 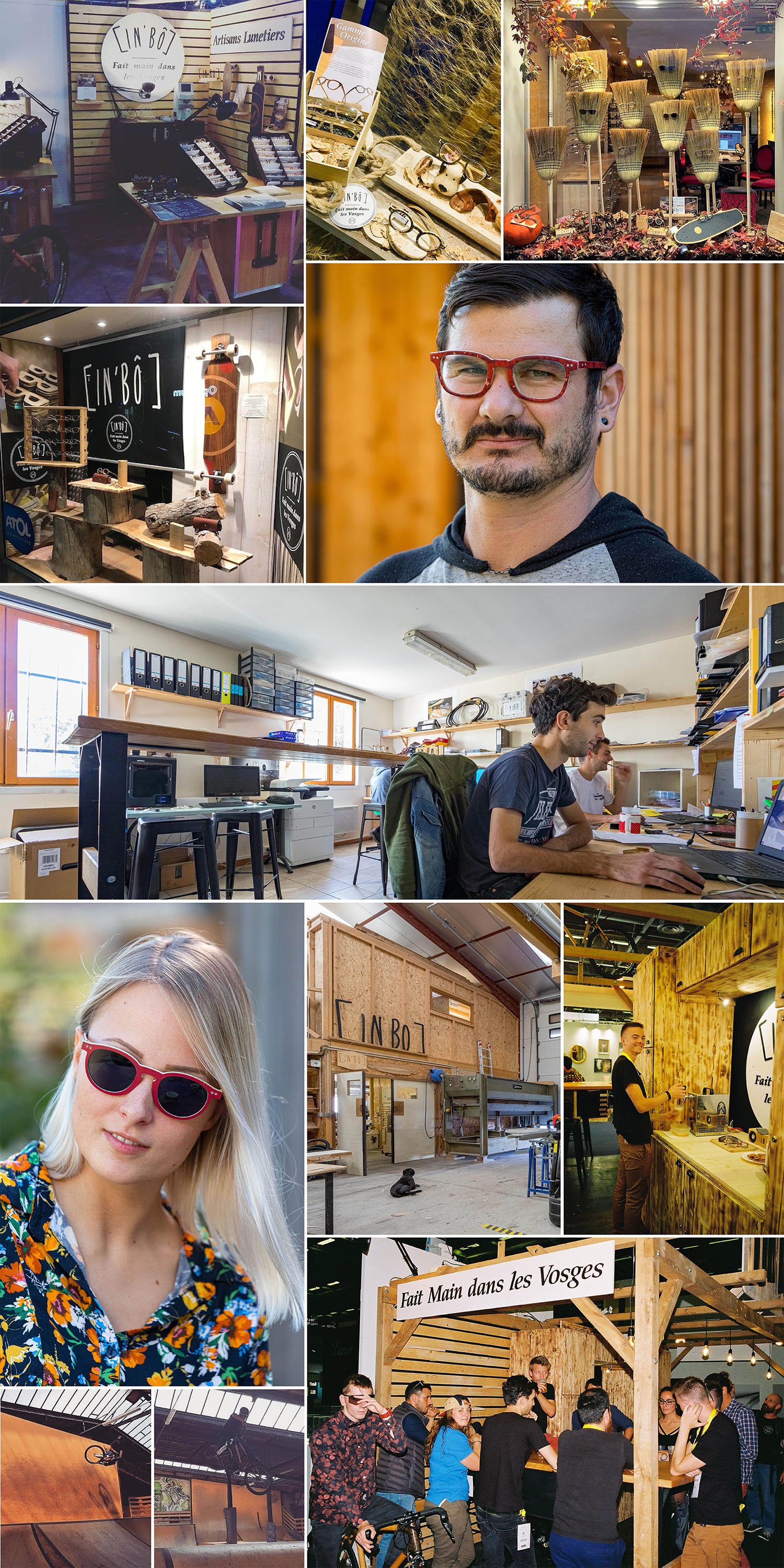 The Covid arrives, R.I.P. projects ... During this unprecedented period, the company had to adapt. We tried, as best we could, to decode the government's announcements and to use common sense in order to adjust our operations as best we could.

Difficult, of course, but not impossible! After two weeks of closure of the company, in order to take the necessary distance on the situation and to leave to each one the possibility of exercising a 14 days quarantine, the company reopens on March 30th. Only the people in production and on a voluntary basis were able to return to work, the effort is collective despite the complexity of the situation. The sales team is on short-time working.

Several measures have been put in place to ensure the protection of the teams: posting of signs, barrier gestures, reorganization of workstations and even the creation of two teams that do not cross paths.

This crisis has allowed us to take the time necessary to test new methods (flexible working hours for all) or to train all our eyewear craftsmen internally and to move from an assembly line production to a more artisanal way of working where each person produces his own frame from A to Z. 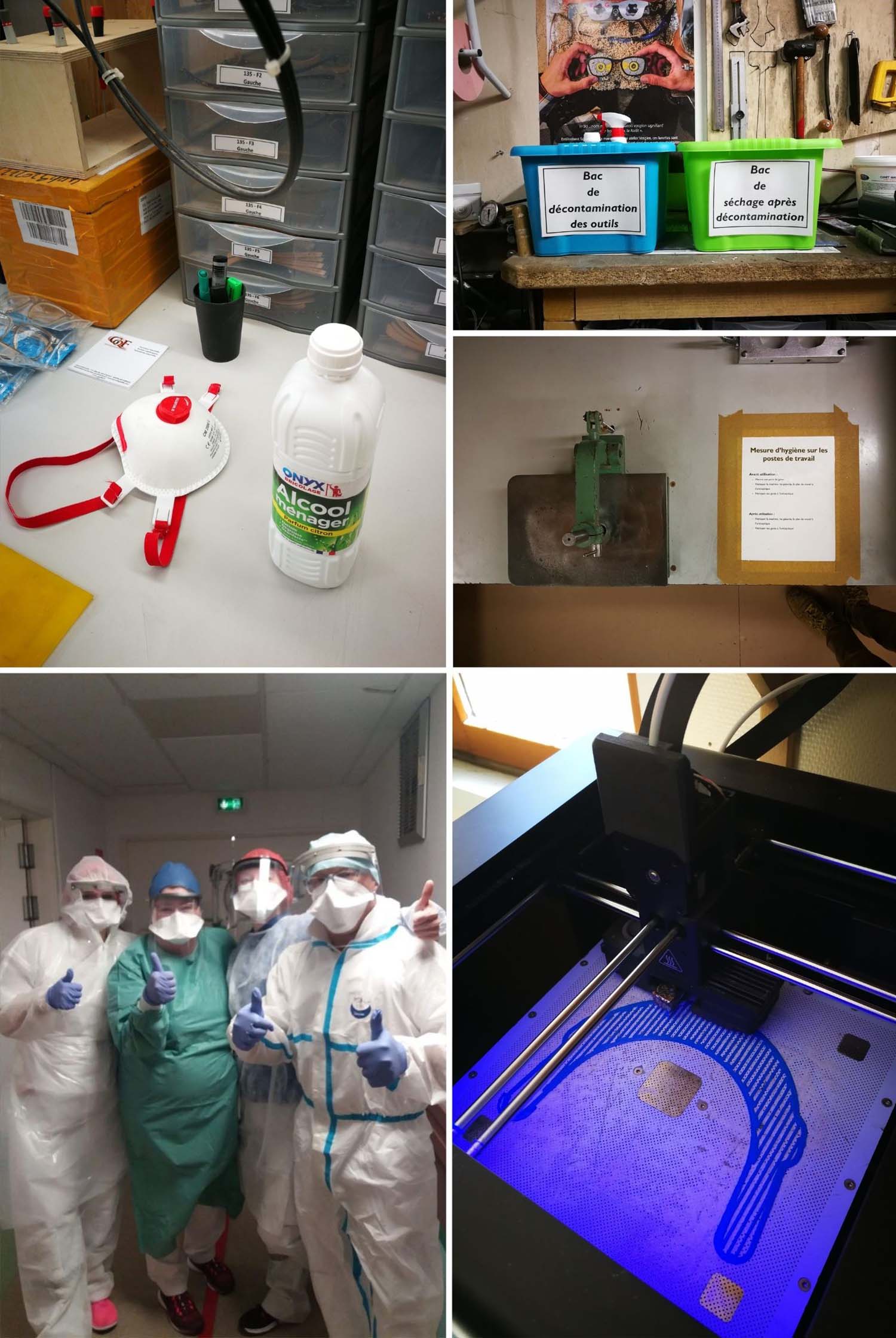 We turn the page to continue the development of the company by creating a pole dedicated to the marketing and the communication with the arrival of Dylan and Léo-Pol who come to help Antoine. We can also count among the new members Nicolas who joined the workshop as well as Justine and Julien in alternation.

With the arrival of all these people, the workshop became much too small. An extension of the workshop of 500 m² was built in order to find some comfort, to allow the company to continue to grow and develop new projects.

Benoît, a cabinetmaker who launches his activity, takes advantage of a corner of the workshop to develop hiscompany : DE COMBRET.

As for Aurèle, he has decided to set sail for a period of 2 years aboard a 1984 dinghy. He plans to sail around the Atlantic. See you soon, friend! 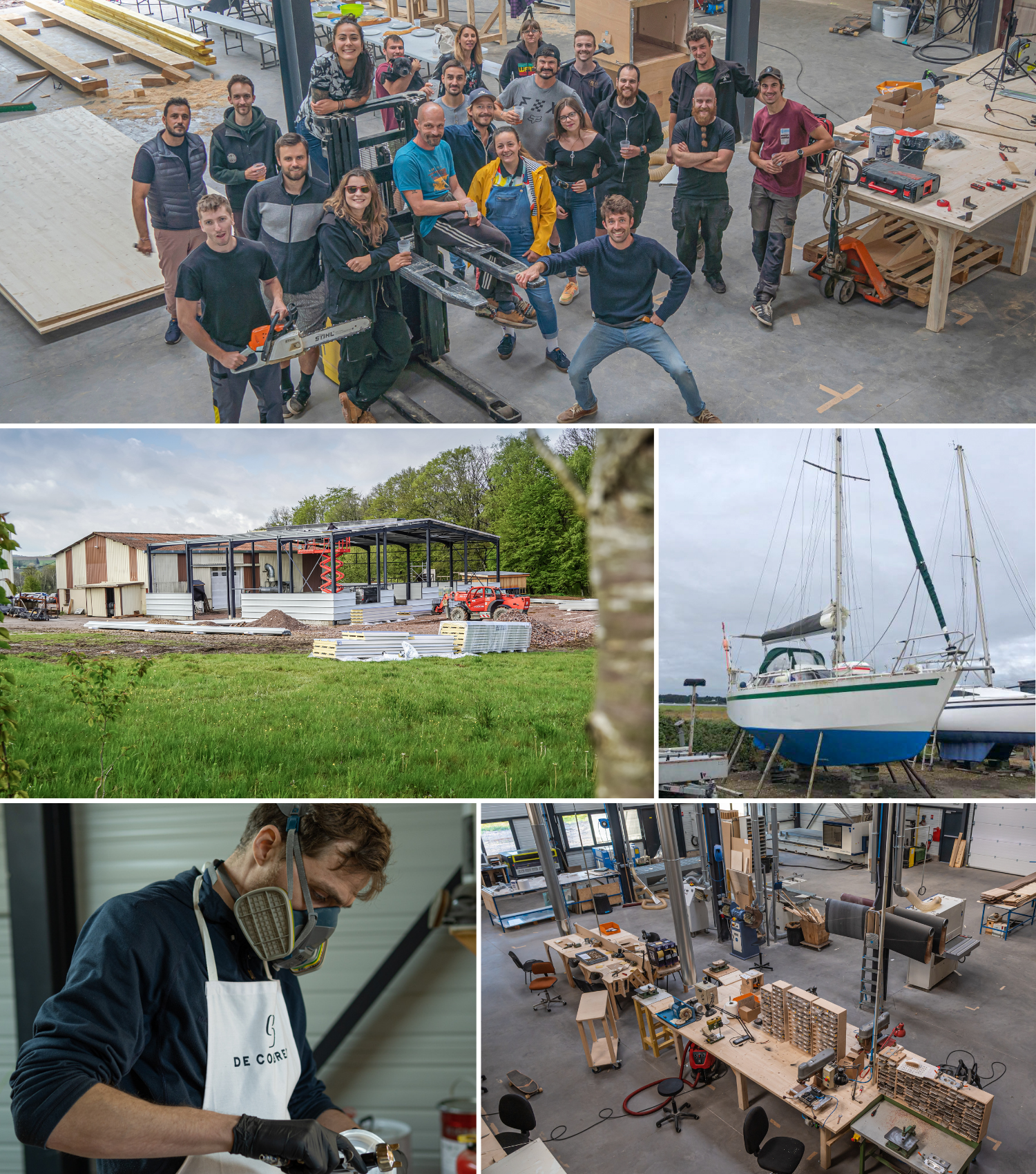